It’s almost 2016, and one of my goals for next year is to look after my brain by eating keto as much as possible.

As I did the usual over ordering on the Christmas food, we have a fridge full of ham and turkey, so a few recipes that are keto and left-over friendly might be handy.

First job after the Boxing day hordes have finished picking at the turkey is to strip all the meat off the bones, scoop out the stuffing that’s left in the cavity, and throw the bones into the stock pot plus onion, carrot, celery and any fresh thyme or bayleaves to hand. Simmer slowly for a few hours and use the rich, unctuous stock for soups and stews.

I’ll be trying these over the next couple of weeks: 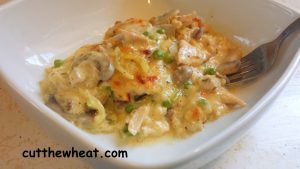 I’ll post some pics and some recipes as I make them.

This site uses Akismet to reduce spam. Learn how your comment data is processed.